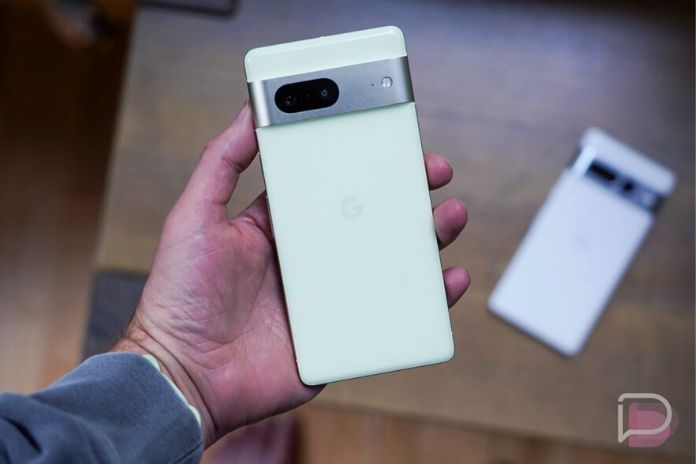 Pixel 6 hadn’t quite convinced me. Unlike the Pixel 6 Pro, which had noticeably improved upon retry, its younger brother had too many dark sides. Although far from the disaster of the first months, there were too many controversial aspects: starting from the design, with questionable and somewhat false stylistic choices, with a touch and feel not adequate for a phone proposed for just under 700 euros (net of offers, no VAT and so on), a display inferior to competitors, a problematic fingerprint and temperature management problems. As if that were not enough, the ballerina autonomy and a modem with some critical issues made Pixel 6 challenging to recommend without reservations. Will Google have worked hard to give us a smartphone that is finally up to par? Let’s find out now!

The package includes the following:

Pixel 7 does not revolutionize the particular design (and not successful, in my opinion) of Pixel 6, but it perfects and improves it where necessary. The contrasting matt finishes of the glossy rear are pleasant; the camera bump has also been improved, which is much more harmonious and refined. The glass and aluminum mix works, even if we may not have that feeling of value that gives us the name Xiaomi 12 or Oppo Reno 8 Pro, for example. Ergonomics are also excellent: correct dimensions and balanced products (even if the device is not very light) make it appreciated.

Difficult, despite several days of use, to get a precise and safe idea of ​​the Pixel 7’s autonomy. This is because (and unfortunately, it is a déjà vu) it seems to suffer from mobile use and cell changes, as well as situations where the reception is fatigue reception (for example, in some indoor environments). There is extreme variability in battery discharge, even on standby. It can cover the day as much as it can abandon you at dinner time. If it is true that autonomy is always subject to numerous variables, here, the situation seems amplified. Charging at 30W takes about 1 hour and 15 minutes to complete (30 minutes for 50%), and the wireless one stops at 20W (theoretical, given the still fluctuating efficiency of this technology).

Fortunately, the connectivity problems with the Pixel 6 did not manifest themselves: it is not the phone with the best reception in the world, but not even a phone that creates problems. The data network is also stable. A little less reliable in the network switch, which is slower than average. However, there was nothing to do with the Pixel 6, which lost the data network for a few moments—very reliable Bluetooth, like Android Auto. Payments with Google Pay / Wallet are also flawless. As always, there is video output from the type C sock

As anticipated in the introduction, the Pixel 6’s display wasn’t great. Suitable for a midrange from 200-250 € but not for a device that claimed to touch the 700 €. Here things change: we have an excellent panel (which integrates a fingerprint which is also improved, although a bit picky with the glass protectors), OLED also, in this case, with well-balanced colors, good external readability, and definition appropriate. No strange tint in any case (at least on our specimen). On average, the choice to aim for 90 Hz (there would have been 120 Hz). Excellent digitizer, precise and responsive.

Vibration has always been a strength of the Pixels: compared to the Pixel 6, which was a bit disappointed in this area too (although haptic, the vibration feed was less complete and less decisive), the Pixel 7 shows its muscles and vibration is practically perfect, one of the best you could wish for. Less well the audio: ok, the two speakers, ok also the presence of three microphones with excellent noise suppression, but the two speakers are too low in the low frequencies, and there is a distortion that is well audible at high volume. We could (and should) do more.

Pixel 7 mounts the new Tensor G2. Now, perhaps, in quotation marks, since the differences don’t seem so marked. Again there is the modem (from Samsung), and the production process has remained at 5nm (Samsung also produces the SoC), despite rumors. New SoC has more or less the same problems. As specified in the chapter dedicated to connectivity, things have certainly improved, probably thanks to the new modem (which, however, still does not seem perfect). However, the temperature management is tremendously reminiscent of the first Tensor.

It often tends to heat up, albeit not excessively, then reduce performance (although not perceptibly) due to thermal throttling. At least with my use, there is no lag. However, it is fair to point out that the CPU power after ten minutes of not-too-intense use can be reduced by 30-40%. In cases like these, like when connectivity is scarce, consumption increases in addition to temperatures. All this is during everyday use, not necessarily in gaming. Instead, there is nothing to say about the interface: the usual Pixel UI for better than evil.

Performance is solid, intelligent features plentiful (instant translations, music recognition, and gallery features are just the tip of the iceberg), and there’s an eye on security as ever. Let’s not forget the five years of guaranteed updates. You may like or not like it in terms of design, but it will hardly disappoint you. We have criticized this interface several times because there were still some aspects to polish, but now it is complete and more reliable. The anomalies we found seem (unfortunately) more of a design nature than related to software.

When it comes to photography, Google is always at the top. We don’t have a hardware improvement over the Pixel 6, apart from the front camera, which goes up to 10.8 MP. The results, however, are slightly better, even taking into account the update on Pixel 6, which had solved the youth problems. The detail is always excellent, the focus is precise, and the images returned are flawless. The 12 MP ultrawide also performs very well. The front camera is convincing, despite not having autofocus. It lacks an optical zoom, which is present on the Pixel 7 pro. The macro mode is also missing, making it necessary to move away a little if you want to photograph relatively close subjects.

Portrait mode looks improved: the contour is not always perfect, but the blur is more natural than in the past, with a less artificial detachment between the subject and background. Google has done an excellent job in the video sector: all the cameras (even the front one) allow recording in 4K 60fps with excellent stabilization and extremely fast focusing. Less attractive is the cinematic mode, which seems more like a habit put there because now many have it (Apple, above all). Ok, the first was Oneplus, but it is undeniable that the popularity of this function is inextricably ascribable to the Cupertino house.

Ok, the first was Oneplus, but it is undeniable that the popularity of this function is indissolubly ascribable to the Cupertino house. Having said this, it all sounds lovely, but some clarifications must be made. For example, although at night the results are generally excellent, the management of the lights is sometimes not what one would expect, and the flare is also often present. Another aspect, the colors during the day are beautiful to look at but not too natural. A strategy probably wanted by Google given the use we usually make of images taken with the smartphone. However, it would take the ability to manage the color calibration and white balance in a more particular way.

Six hundred forty-nine euros for the 128 GB version and 749 euros for the 256 GB variant are in line with the previous generation. This is undoubtedly good since competitors have raised their prices. But beware, Google is not giving us anything. It is not an absolute best buy, and no, this Pixel 7 is not a top-of-the-range but a high-end phone. We bought it with the 20% discount that Google sometimes reserves for owners of old Pixels (we have a long history of purchases), and we paid € 599 for the 256GB variant.

Here, this is the price. Not in an absolute sense; however, there are some aspects that Google must necessarily solve, see the unreliable autonomy and the temperatures; you also see audio not up to par. Best buy? The best in the world? I’ve read incredible claims, but that’s not the case. It’s a great phone to be treated as such. It is not a product that outperforms the competition because not everyone is looking for photos and five years of updates. Is the Pixel 7 Pro worth the extra money? For me, yes, but only you know your needs. The Tensor G2? Still puzzling; we’ll see with updates.

Read Also: Apple 2022: The Best Products On Offer On