In This French Pizzeria, A Robot Bakes The Pizza 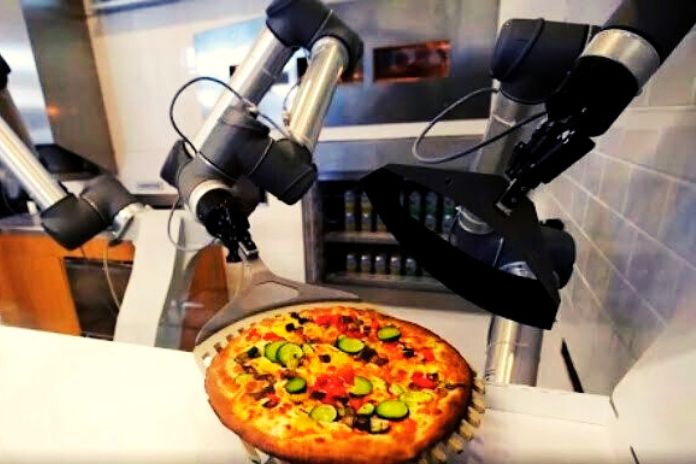 In the Beaubourg district of Paris, a robot prepares fresh pizzas. interested people worldwide have wanted to open their robot pizzeria, since the opening, the inventors now need new investors.  Thin base, delicious sauce, and very important: lots of cheese. Who doesn’t get their mouth watering at the thought of a fresh pizza? The globally popular dish was invented in Italy. But two French founders have taken pizza baking to a new level.

Because in the Beaubourg district of Paris, nobody bakes fresh pizzas. Instead, there is a three-armed, fully automatic robot behind the counter. The French radio station Europe 1 has now awarded the Robo-pizzeria the “Trophées de lÁvenir” innovation prize and presented the robot pizzeria.

This Is How The Parisian Robot Pizzeria Works

Customers can place their orders via the restaurant’s touch screen or the app. The three-armed robot then prepares the ordered pizza behind a pane of glass without human help – from kneading the dough to cutting the pizza in the box. Guests of the robot pizzeria can watch the preparation of their pizza live.

The idea came from developers Cyril Hamon and Sebastien Rovers. Following the example of tech genius Steve Jobs, they began working on their company Pazzi Robotics and thus also on the pizza robot in their garage.

However, the development of technology proved to be very complex. “It required almost nine years of research and development. It involved a combination of complex engineering disciplines, including electronics, mechanics, computer science, and artificial intelligence, to control the robot”.

However, the work of the two founders is now paying off. The robot pizzeria in Paris is already the second location in France. More are to follow. In addition, the two founders continue to refine their technology. For example, future bars should be smaller overall and thus offer even more location options.

Pizza Robots To Compensate For The Labor Shortage

With the fully automatic robot pizzeria, Pazzi Robotics not only wants to make a delicious pizza. Technology is also said to be the solution to the prevailing labor shortage. “This is particularly true in France, where 237,000 people left their jobs in a year. This situation is throwing the hospitality industry into turmoil,” said CEO Philippe Goldman.

Since the start, the two founders have received 13 million euros from private investors and investment funds. The fact that other countries also want to close the personnel gap with robots is shown by the high number of inquiries the company has received since then. Interested parties from all over the world want to open their robot pizzeria.

“To meet this demand, we now need an investor who can participate in the capital to ensure the commercial implementation of our project”. If Pizza Robotics receives the necessary support, we might soon be able to watch a robot baking our pizza in Germany too.

ALSO READ: Internet Of Things 2022: These Are The Three Most Important Trends